Not content to talk datacenter, AMD announced a bunch of new client offerings during Analyst Day. Of these SemiAccurate thinks the Ryzen Pro line will be the most important.

As usual we will start this out by saying AMD released effectively no details so we can’t say if these products are great, awful, or even meet what we consider the bare minimum requirements for the class of devices they are aimed at. We will know for sure in the distant future but for now lets take a look at what we can say with reasonable certainty. 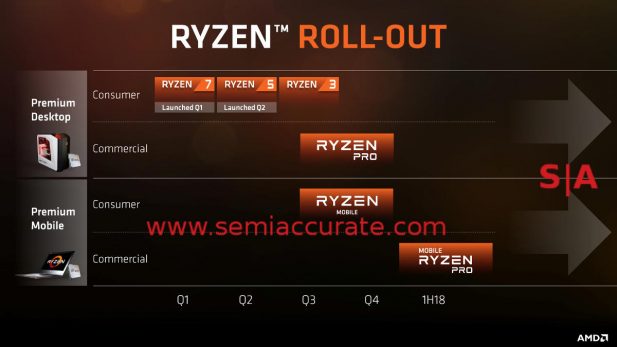 The obvious first starting point is Ryzen 3 in Q3, aka a cut-down version of the current parts and Zen based APUs. This one isn’t going to be very exciting to anyone other than OEMs looking to sell cheap 4-core boxes and people on an extreme budget hoping for later upgrades. Given the cost of the bigger Ryzen 5/7 parts, or lack thereof, the 3 line isn’t much to talk about if you are not making PCs en masse. If AMD is calling the APUs 3, then we know what this will bring too, nothing exciting here so far.

Later on in Q3 we will see an important one, Ryzen Mobile aka Banded Kestrel which we told you about last September. This is where AMD makes both money and marketshare, assuming the part is any good. This again isn’t to say it won’t be, just with the way it was messaged we can’t tell. Given AMD’s marketshare in the mobile, and more importantly corporate mobile space, the Ryzen Mobile APU has to take marketshare.

If you are wondering about the timing which sees it debut about six months after Ryzen the elder, there is a good reason for this. No it isn’t the always rumored fanboi technical problems galore, there aren’t any once again. The problem is that notebooks get refreshed basically twice a year for ‘back to school’ and after Christmas/spring seasons. To hit this window the CPU/APUs have to be in volume months before and AMD missed the last window with Ryzen. The next intercept was the fall cycle so there you have it.

AMD’s biggest bang from their Financial Analyst Day is unquestionably Ryzen Pro. This one has tremendous potential to make a lot of money. Why? Because the corporate space demands manageability and AMD has never had a solution in that space. Intel has with their vPro/AMT offerings but that is such a horrific security liability that it should be avoided by buyers at all costs. Unfortunately you can’t. By that we mean you can not buy an Intel CPU without the security problem that is vPro/AMT, period.

This presents an opportunity for AMD and it is a big, high margin opportunity at that. Once again it all depends on the details and AMD hasn’t put any out there so Ryzen Pro soaring like an eagle or getting sucked into a jet engine like a seagull is still an open question. If AMD does right it will be a very nice option for buyers who care about security at a minimal level or more. If they did it wrong, well, they can’t lose marketshare in this space. Time will tell, assuming AMD bothers to talk about it.

Lastly we have the obligatory tip of the hat to the enthusiasts with Ryzen Threadripper. This is a 2-die MCM variant of the current Ryzen 7 line or the consumer version of Snowy Owl. And it is dumb for all the same reasons Intel’s 10-core Broadwell-E and impending 12-core Sandy Bridge-E are dumb. Yes that is cores, 8C/16T is more than any game out there can reasonably use bar a few corner cases. 10/20 adds nothing but price and 12/24 makes things worse. 16/32 takes a bad idea to its logical conclusions and doesn’t stop there.

Worse yet adding cores detracts once you hit more than a 6-core variants because the clocks go down after 6C on the Intel side. Clock speed almost linearly increases single threaded performance and that is what most games are bound by, see Amdahl’s Law for more on that. So unless AMD jacks TDPs to the moon, by adding more threads all they do is decrease gaming performance.

But there is an actual good reason to make Threadripper and it is tied in to the architecture of Naples. Each Zepplin die has 8C and two memory channels. Intel’s big -E line has four memory channels and most games can actually use more memory bandwidth. AMD can’t do an 8C 4-channel part with one Zepplin, you need a second which means 16C in total. In essence the memory channels are what Threadripper is about, 16C is a side effect that unfortunately gets all the headlines because the press and enthusiasts are mostly technically ignorant. If AMD offers an 8C Threadripper with disabled on each die, that will be the one to jump on for all the right reasons, TDP, clocks, and price.

At Financial Analyst day, AMD put out blizzard of names and product offerings but no details. The offerings look good on paper but that is the point of their launch. Will the actual details throw cold water on the products or will they back up what we suspect? Given the performance of the current Ryzen parts SemiAccurate will take a cautiously optimistic approach while we wait. With luck we will actually get those details soon.S|A